Home Lifestyle The Note I Found of the Boy Pointing the Gun at His Head
Lifestyle
July 27, 2021
ltadmin 0

I was cleaning up around the front doors of the school building we use for church on Sunday (yes, our state is open, our church is gathering on).

It was a typical windy winter day, so there was a pile of swirling leaves and the usual detritus from school a couple of days ago; lunch wrappings, a sultana box, a drinks container, someone’s sports bag in the corner, and random pieces of paper.

I’m a bit of a neat freak (some people would say OCD, but hey!), so with people using those doors in about an hour’s time to come into the building, I tidied up the rubbish, scurrying to catch some of it as the wind whipped it around in ever tightening eddies.

As I bent over to pick up a piece of scurrying cling film, a piece of paper caught my eye. It caught my eye because it was obviously torn from a notepad and then folded up. It was lying near the bins. I picked it up, curious. Obviously a note. A note from someone in the school to someone else in the school.

I put the other rubbish in the bin. I had the note left over. I felt a bit voyeuristic.  Was this mere titillation, a script version of a Peeping Tom? What would the note say?  Who it would it be to? Who would it be from? Who would it be about?  I wonder why I even picked it up.

In unfolded the piece of paper, and just felt incredibly sad. 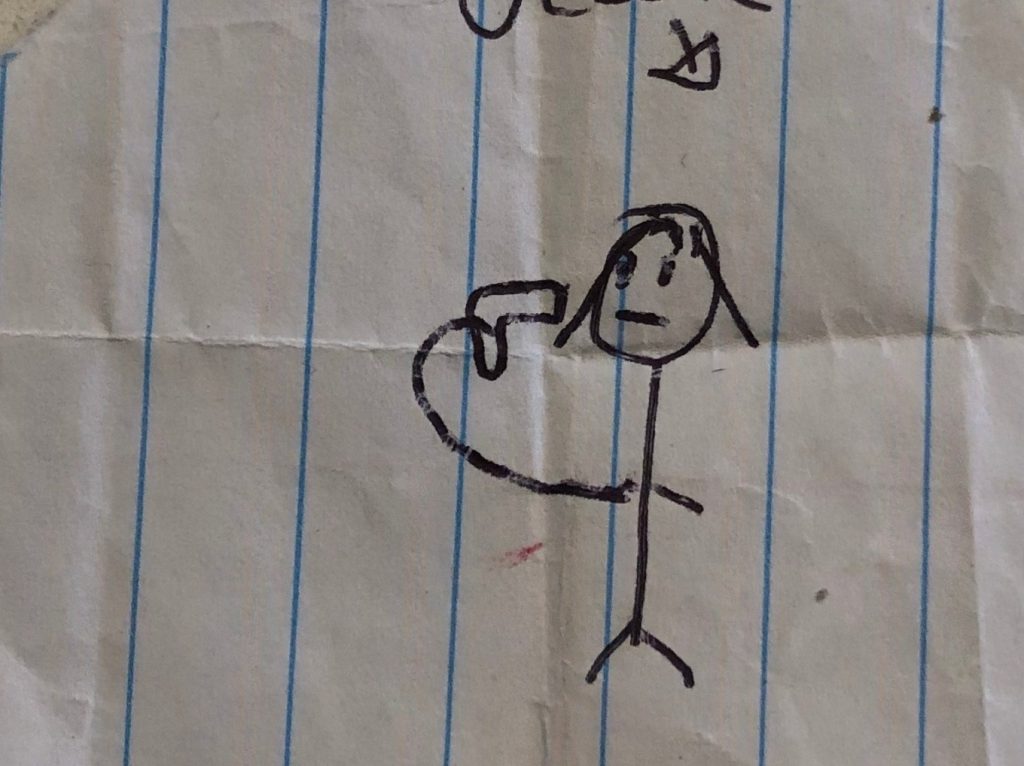 Well it’s most of the note. I cropped off the name of the boy scribbled down above the arrow. That would be too revealing. The boy who someone else decided they should draw pointing a gun at their head.  The school is big, but it’s not that big, and we’re a church meeting at the school, so someone just might know that boy, and that spelling of that name.

There was something mean spirited about it. Something dehumanising. That someone had taken the time to draw a picture of another student pointing a gun at their own head and putting their name above it, with an arrow pointing downwards: That’s him folks, that (FILL IN THE BLANK) pointing a gun at his head!

But it didn’t feel like a joke. It felt like a tear across the soul, never mind a piece of paper. What had I been expecting?  A love note? A reminder note? A word of encouragement?

I hope that boy with the torn off name didn’t get to see it, unless of course it was a joke. I guess it was passed on to someone else about him. And all I was left with was the speculation, without in any way of knowing who the people involved were, what they were doing this for, and who this boy might be, or what this boy might have done – or not done – to elicit such a response.

And then I thought worse. Perhaps that boy drew that note of himself. It is entirely possible. We live in that kind of world. Schools are not pain free zones, in fact there is plenty of pain in a school, and it elicits enough pain itself for many students that the effects linger for decades. Just ask any psychologist. The forming years are the years where things stick.  Where things burrow themselves deep.

It was a reminder to me, as church was about to start, that people come into our lives in parts.  We never get to see the whole. We see a torn off part of someone’s day, their week, their lives, and it’s easy to think we see the whole picture, or the context.  But we don’t.

I was preaching at church on Sunday night. Preaching about not grieving as those who have no hope. We see so much grief and so little hope around us, and that little torn note felt like a barb in my skin that pushed me to proclaim the wonder of Jesus, who he is and what he came to do for humans.  And what did Jesus come to do?

I guess there’s little chance that the boy in the note pointing the gun at his head, or the student who drew it, will see it, so it feels like a small win.  But a win nonetheless. 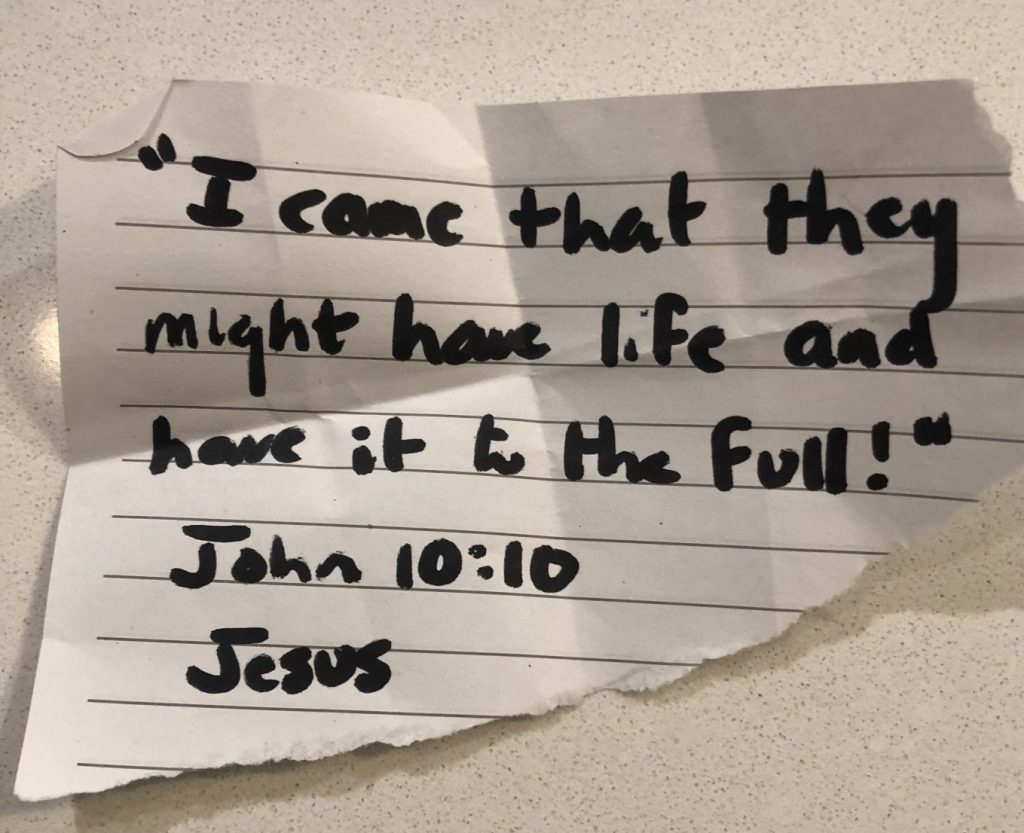 It’s a small gesture to counter the note with the boy pointing the gun at his head. But a life-affirming gesture.  And don’t we desperately need those at the moment.

Boy Writes His Mum a Note After Missing the School Bus