The Australian Christian community has come together in a massive show of support and advocacy for Afghans fleeing the Taliban regime.

Christians United for Afghanistan is a movement across church networks and denominations. It was birthed quickly out of a shared response to unfolding tragedy.

“Most of us were watching with impotence and anxiety the terrible scenes happening in Afghanistan,” Micah Australia executive director Tim Costello said, referring to Christian leaders and groups across Australia.

“We all said, ‘What can we do?’ We all felt helpless [but] we discovered that right across the church – from Sydney Anglicans to Hillsong, to Catholics – people were feeling exactly the same.”

Christians United for Afghanistan was born, spearheaded by Micah Australia. The movement wants the Federal Government to do three things: increase the amount of humanitarian visas for Afghans; grant permanent protection to Afghans already in Australia on temporary visas; and, increase humanitarian aid to Afghanistan.

Costello urged everyone to sign the petition for foreign policy changes, so the definitive and united voice of Australian Christians could be put loudly to the Morrison Government.

Costello said women and children make up about 80 per cent of the 500,000 Afghans who have fled their homes this year. Such a horrific statistic compelled Christians United for Afghanistan to call upon the Federal Government to welcome 20,000 refugees. The UK and Canada have offered that many visas, while Australia has committed to 3000.

Those who are “most at risk from the Taliban” must be the priority, Costello added.

Another aim of this campaign was to let Australia know “churches have skin in the game”, as Costello put it.

“What has really motivated us is we know the Scriptures teach of a God whose heart is particularly for the plight of the ‘stranger’, as refugees are called in our Bible,” – Tim Costello

“We are willing to help foster and resettle Afghani people here.”

“Churches are willing to put up [homes] they have un-rented, or material support.”

“What has really motivated us is we know the Scriptures teach of a God whose heart is particularly for the plight of the ‘stranger’, as refugees are called in our Bible.

“Seeing the scenes on TV and the shock and the speed of this, I think it has galvanised Christians in saying that this goes right to the heart of our faith.”

What can you do

“Politicians normally put their finger up to see which way the wind is blowing and then say, ‘I’ll follow that wind,’” Costello said. He said it is “really important” to let MPs know the wind is blowing in the direction of being generous to Afghanistan.

“That’s the call, and raise your voice with your church to ask what can we practically do when Afghans are welcomed here and resettled,” Costello said.

“As followers of Jesus, we believe each person is precious and loved by God. Right now, the scale of this crisis requires us to work together to provide protection and refuge to those who are in danger,” – Rev Sharon Hollis, Uniting Church in Australia President

“I’m calling on the Australian Government to be as compassionate as we can be in responding to the unfolding crisis in Afghanistan. Jesus said, ‘Love your neighbour as yourself,’ and after 20 years in Afghanistan, we should have no hesitation saying they are our neighbours,” – Kanishka Raffel, Sydney Anglican Archbishop

“We live in a troubled world, but every so often we see a moment of such intense trouble that it demands our special attention. Australia has often stepped forward at such times to do what we can, for those who are persecuted, displaced, and hurting. Afghanistan is such a moment,” – Martyn Iles, Managing Director, Australian Christian Lobby

“We live in a troubled world, but every so often we see a moment of such intense trouble that it demands our special attention,” – Martyn Iles, Managing Director, Australian Christian Lobby

“Our Christian call to love our neighbours takes more than words – it takes action to love someone. These lands now called Australia must be known as a place of compassion and welcome for those who need safety,” – Brooke Prentis, CEO Common Grace and Aboriginal Christian Leader

“If we are to take our faith and shared humanity seriously, then one of the most important things we can be doing is speaking up for those who can’t speak for themselves. But speaking also needs to be translated into effective and generous actions and that means increasing our humanitarian response and refugee intake,” – Melissa Lipsett, Acting CEO, Baptist World Aid

“The situation in Afghanistan has horrified us all. We believe that in our privileged nation, we have the opportunity to do whatever we can to respond with kindness and mercy, to assist those desperate to leave Afghanistan. We are grateful that our Australian Government has been willing to help those in the very dire situation in Afghanistan. As Christians, we stand ready to assist in whatever we can,” – Wayne Alcorn, Australian Christian Churches National President

Aid Agencies, Celebrities, Churches and Leaders Get Behind the ‘End COVID For All’ Campaign 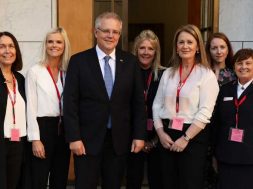