Many people put on weight during the pandemic last year, according to a clinical dietician.

Tuo Tao said he saw a big rush of people coming to see him last year with weight gain issues.

“If I saw 10 people, eight or seven said they put on too much weight during COVID because they now worked from home,” he said in a radio interview.

“They just have no control in terms of what they eat because the food becomes so easy to access at home versus at work.”

“They just have no control in terms of what they eat because the food becomes so easy to access at home versus at work.” – Tuo Tao, clinical dietician

One of the biggest causes of this is what he refers to as “mindless eating”, where people eat without paying any attention to what they’re eating.

“A typical example would be after work, after dinner, you just want to chill out on the couch and watch some TV,” Mr Tao said.

“And what happens is you’ll feel like something, and that’s when people reach out for chips and chocolate and eat while they watch something.”

Mr Tao said they don’t think about what they’re eating or the amount they’re consuming because their attention is on the screen, which leads them to consume extra calories that their bodies don’t need.

“And then gradually, day by day, week by week, month by month, that’s where we get this unnecessary amount of visceral fat,” he said.

Mindless eating became worse as the pandemic essentially shut down life as we knew it.

“When they’re staring at the [computer] screen and they get bored they reach for food… exactly the same [way they do] while they watch TV or a movie.”

A survey by Ipsos, which looked at the impact of COVID-19 on diet across 30 countries, found that more than a third of Australians gained weight during the pandemic.

Australians also consumed more alcohol, topping the list with 21 per cent claiming they started drinking more alcohol, compared to the global average of 10 per cent.

Data from the Australian Bureau of Statistics found there was an increase in four per cent of food and non-alcoholic beverages sold in the 2019-20 financial year compared to the previous year.

According to its Apparent Consumption of Selected Foodstuffs, Australia publication, over one third of products consumed from food and non-alcoholic beverage sales came from discretionary foods.

However, it wasn’t all bad news last year. The Ipsos survey found that one in five Australians – or 19 per cent – reported losing weight during the pandemic, which was in line with the global average of 20 per cent.

And the ABS Household Impacts of COVID-19 Survey for January 2021 found that over two in three people reported that their physical health in January 2021 was about the same as before COVID-19 restrictions began in March 2020.

“The biggest thing is if you work, you don’t eat… Only create an eating environment in the kitchen.” – Tuo Tao, clinical dietician

“The biggest thing is if you work, you don’t eat. Just put a glass of water in front of you. Sometimes we reach for food because we feel thirsty,” he said.

“Only create an eating environment in the kitchen so, you go there if you feel hungry. Yes, you can have some snacks but you go to your kitchen. But once you’re out of the kitchen, go back to your work desk and you don’t eat.”

“This group is purely to help our community shop and eat healthy, with practical shopping and cooking tips, and evidence-based nutrition information,” he said.

He also wants the group to connect the community with health professionals like himself and the food industry.

“Food companies play a vital role… they can make food to target certain markets, but also if we have a great need from the community on healthy eating then we can put pressure on the food company,” he said.

Feature image: Photo by The Creative Exchange on Unsplash 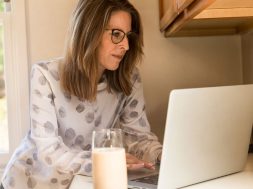 Getting Into the Zone When Working from Home