Home Lifestyle The Defining Traits Of The Next Generation
Lifestyle
January 14, 2020
ltadmin 0

The Defining Traits Of The Next Generation

The Defining Traits Of The Next Generation

Additionally, there are now more Australians born since 1980 than before it. This means that Gen Y (born from 1980 to 1994), Gen Z and Gen Alpha comprise more than half of the population.

There is a lot written about the emerging generations but much of it is mere observation or opinion. Therefore, we decided to explore the defining traits of the next generation, who are characterised by multiple jobs, lifelong learning, digital devices and increasing connectivity.

The point is that we have entered a new era and while we need not react to every whim of a new generation, we cannot hold fast to the old and expect the emerging generations to conform.

Read more via our latest report on Understanding Generation Z: Recruiting, Training and Leading the Next Generation.

The emerging generations have integrated technology seamlessly into their lives. Having used it from the youngest age, it is almost like the air they breathe, permeating all areas of their lifestyle and relationships. For the digital integrator, technology has blurred the lines of work and social. Of study and entertainment. Of private and public. Simplicity and flexibility amidst the complexity of busy lives are some of the key benefits that technology brings the digital integrator.

Children today live in an open-book environment. They are just a few clicks away from any piece of information. They connect in a borderless world – across countries and cultures. They communicate in a post-literate community where visuals and videos get the most cut-through. They are highly intuitive and confident, unaided users of digital technology. They are too young to remember its arrival. They have grown up with and, in many cases, have been significantly socialised by screen-based devices.

Screen time on the rise for the next generation

While screens today are often used to replace a pacifier, the recommended screen-time for a child between the ages of 2 and 5 is no more than 1 hour a day. For 5-17 year old’s, it’s no more than 2 hours per day, according the Australian Department of Health. Yet on average, kids between these ages spend up to 3.5 hours every weekday (Monday-Friday) using screen-based devices, which is almost equivalent to 40% of their total waking hours. On the weekend, this amount increases by about 20% to an average of about 4.5 hours a day.

Gen Z and Gen Alpha are the first generations to be truly global. Music, movies and celebrities are more global for them than they have been for previous generations. Through technology, globalisation and our culturally diverse times, the fashions, foods, online entertainment, social trends, communications and even the “must watch YouTube videos and memes” are global as never before.

Wherever they are in the world, children today are logged-on and linked-up. From Sydney to Shanghai, Melbourne to Madras, they are influenced by the same movies, music, fashions and food. In this wireless world their technology knows no boundaries and nor do their blogs, friendships and vocabulary.

More than any other generation, today’s youth are extensively connected to and shaped by their peers. Due to social media platforms such as Facebook and Instagram, children are influenced by a network that is larger both numerically and geographically, and being technology based, their network is connected 24/7. This technology, while helping to facilitate their relational world can also negatively impact it. Our research shows that a quarter of students who have been bullied, have been bullied via social media, text messages or email (24%).

Digital technology means that users are constantly connected to others across social, geographic and demographic boundaries. This ‘social world’ augments close friends and family as the primary source of information, opinion and recommendation. The smallest piece of noise can be amplified massively and instantly. Everything from reputation to purchasing decisions to sales channels is impacted.

Not only are the emerging generations mobile in terms of using technology constantly and when they are on-the-go, they are also moving homes, jobs, and careers faster than ever before. Today’s school leaver is expected to have 18 jobs across 6 careers.

This generation is more formally educated than any generation before them and is set to enter a workforce where they, rather than jobs, are in demand. Therefore, the future depends on understanding and engaging with this 21st-Century generation. In order to fulfil the demand for labour and to ensure the future of our employment sector, employers will need to adapt to and accommodate this mobile generation.

While Google has 3.5 million searches per day, almost 5 billion videos are watched on YouTube every day. We have an emerging generation, many of whom are opting to watch a video summarising an issue rather than read an article discussing it.

In an era of information overload, messages have increasingly become image-based. Signs, logos and brands communicate across the language barriers with colour and picture rather than words and phrases. Our analysis of engagement and learning styles has shown the dominance of visual and hands on learning over auditory delivery, which has dominated traditionally.

Digital disruption in the way of automation, robotics and the Internet of Things has led to a focus on developing 21st Century skills for lifelong learning in the next generation. Our research shows that within this context, parents believe students are most equipped (extremely/very) with digital skills (60%) and creativity (57%). There is work to do, however, in the area of critical thinking, with just over two in five parents (43%) believing students are extremely/very equipped in this area. 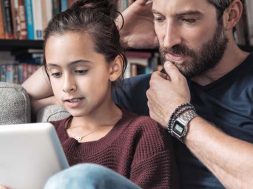 Chill, Mum and Dad: the Digital Age Isn’t All Bad