Home Faith The City and The City: Living In Formational And Worshiping Distance
Faith
June 14, 2021
ltadmin 0

The City and The City: Living In Formational And Worshiping Distance

The City and The City: Living In Formational And Worshiping Distance

In his novel The City and The City, English author China Mieville sets a murder mystery in two cities, Beszel and Ul Quoma.  Bezsel is run down and grimy (think Eastern bloc 1970s), while Ul Quoma is all Singapore glitz and glam.

Inspector Tyador Borlu is tasked to solve the crime, and as a citizen of Beszel has to travel back and forth between his home city and Ul Quoma on a regular basis.

Yet here’s the thing.  Beszel and Ul Quoma are two cities, but they occupy the same geographical location. Each city’s streets and buildings wind and intertwine with the other.

Beszel drivers steer their smokey oil-dripping hunks of metal down a busy potholed road, just metres from Ul Quoma’s citizens purring along in their hybrids on their well-maintained side.

Ul Quoma citizens walk past a government building of one city to get to the government building of their own city.  And to travel to the other city?  You need a passport.  Citizens from each city are not permitted to “see” the other city.  They have been trained from birth to blur it from their minds; to “unsee” it, ignore it and refuse to countenance it, upon pain of committing what is called “breach” – a crime punishable by imprisonment. Any passerby could be a breach officer, so everyone is alert to ensure they are seen to “unsee”.

It’s a brilliant conceit isn’t it? Here’s a clip from the BBC adaption of the novel to whet your appetite:

What might it mean to live as citizens of one city intertwined with citizens of another city, each occupying the same geographical space?  What tensions would that bring? That’s not just a question for fiction, it’s something for us as Christians to consider in our daily lives.  We read in Philippians:

“But our citizenship is in heaven, and from it we await a Saviour, the Lord Jesus Christ..”

Yet here’s the further tension that Beszel and Ul Quoma citizens never have to deal with.  As God’s people we do not unsee the other city.  Indeed we can not unsee it.  Our citizenship requires us to straddle both cities at the same time.  There are no ways to blur the other city out, even as we carry out our tasks as citizens of heaven.

We live and move and have our being as citizens of a heavenly city. But for the moment that is lived out in these cities we belong to.  We work for the King, but we work for the boss also.  Our lives are hid with Christ in God – we are seated in heavenly places -, but at the same time we are seated at work, by the hospital bed, at the cafe, on the train.

Now one day the city we are citizens off will come here and meld the two cities into God’s perfect city – God tabernacling among us again – but until that time?  How do we do all of this heavenly-city living without committing “spiritual breach”?

For some the answer is simple.  Let’s “unsee” the other city.  Let’s curtail our involvement altogether and huddle into our Beszel ghetto. The tendency will be towards withdrawal and sectarianism, a disengagement with the world that leaves us isolated and unable/unwilling to seek the good of the city here below.

For others there is an equal and opposite simplicity, and that is to deny the two city tension altogether.  To assume that the values of one city are no different to the values of the other.  The city of heaven is assumed to be completely aligned with the city here below, such that there is no palpable difference in lifestyle, values, framework, ethics, or indeed hope.

One approach is hostile to the other city, seeing it only as threat.  The other approach is enamoured with it, and all its promise and allure.

Now does the church of God live the tension of these two cities? Mark Sayers book, Reappearing Church: The Hope For Renewal in the Rise of Our Post-Christian Culture has some helpful things to say about it.  Sayers posits what he calls “two key distances” that ensure the citizens of heaven can maintain the tension, namely “Formational Distance” and “Worshipping Distance”.  Sayers states:

The people of God, both in the Hebrew Scriptures and the New testament, found themselves living in proximity to those who did not worship God, and they were vulnerable to being formed and shaped by the ideas and the idols of paganism.  They also found themselves in a world of empires and surrounding nations, linking and connecting the ancient world of the Levant, bringing distant thoughts, cultures and gods close… The church was called to be in the world but not of it. This meant being connected, living in physical proximity, using the infrastructure of connection, but keeping a worshiping and formational distance.  They were to worship the one true God, and they were to be formed by Him.

Sayers describes the role of the church as one of maintaining those two distances – formational distance and worshiping distance – even as we live in proximity.  It’s the city and the city right there.  I think Sayers is on to something.  I think he’s presenting the church as it will have to shape itself in the future, as the city of this secular age pushes us harder and harder, if it is to not only survive, but thrive.  But I think that by God’s Spirit it can be done.  Sayers summarises the result of both distances.

Formational Distance: They were to be physically close to their neighbours, yet their minds and lives were to be set upon and shaped by heaven.

Worshiping Distance: Being physically close to others and present in a dominant culture, while worshiping and being empowered by a different divine source of power.

Whatever else you think the church is supposed to do, if it’s not doing those two things for citizens of a heavenly city who are intertwined with this city below, then it is not doing what it should be doing.  It is not shaping people away from the values of a city that will not last, and towards the values of the city that is eternal.

If our churches aren’t shaping a discipleship program that empowers its people in those two distances, even as they live in proximity, then it is setting them up for the equal and opposite errors of either “unseeing” the city, or being “submerged” into it.  Neither is desirable, indeed both are fatal.

In my next post I will explore some of the ways I think those two distances can be maintained for citizens of heaven who still wish to live well in the city below.  In the meantime, check out Mark Sayers book (and I’ll review it later also), and see if you can carve out some time to either read or watch The City and The City.  Both are compelling. 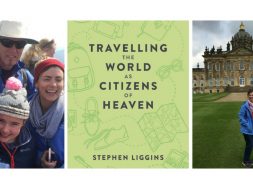 Walking With Christ When You Travel

3 Kinds of Cities You Could Be Living in Tomorrow