This year’s Anzac Day will look a little different to previous years, however, unlike last year, certain events will be taking place around the country.

However, if you are looking forward to a long weekend, you may not get one depending on the state or territory you are in.

Will you get a day off on Monday?

If you live in the ACT, Queensland, South Australia or Western Australia, you will have Monday, April 26, as a public holiday.

However, if you live in NSW, Victoria or Tasmania, it will be business as usual on the Monday following Anzac Day.

The reason for these differences is because of the different legislations that each state and territory adheres to.

For example, in NSW, the Public Holidays Act 2010 states that certain holidays, such as Australia Day and Christmas Day, get a public holiday the following Monday, but Anzac Day is the one exception.

Anzac Day services in your state or territory

This year, the NSW government granted an exemption from COVID-19 restrictions for the Anzac Day veterans’ march in the Sydney CBD, allowing a maximum of 10,000 people to participate in the outdoor event.

Other outdoor marches and services can also be held, with up to 5000 persons subject to the two-square-metre rule.

Indoor services and events will need to comply with restrictions that apply to the premises.

A dawn service will be held at the Shrine of Remembrance. The ticketed event will only allow 1400 people to attend. It will be livestreamed on social media channels, as reported by news.com.au.

The march along St Kilda Road to the Shrine of Remembrance can be attended by a maximum of 5000 veterans and 500 banner bearers and assistance people. It will also be livestreamed and available on ABC TV.

A commemorative service will be held at the Shrine at the conclusion of the march and will consist of a small number of invited veterans and representatives to lay wreaths.

The dawn service will take place at Brisbane’s Shrine of Remembrance, ANZAC Square, and all are welcome to attend, according to its website.

This year’s Anzac Day Parade will be an invite-only event and will be broadcast on ABC TV.

Other marches, parades, dawn services and other remembrance services can also take place in a COVID-safe way.

This year’s dawn service will be a ticketed event, with attendees capped at 4200. The National Ceremony, which traditionally includes the veterans’ march, will be capped at 3000 attendees.

RSLWA will be holding its regular full Anzac Day services, including the Kings Park Dawn Service, the Gunfire Breakfast at Government House, the March through the CBD and the Commemorative Service at Perth Concert Hall.

The dawn service will be limited to 10,000 attendees and the Gunfire Breakfast will cater for 2000 people, according to news.com.au.

The Adelaide Dawn Service will be controlled by numbered bookings and contact-tracing records and can be attended by up to 2500 people.

The Adelaide Anzac Day March will only be attended by veterans, ex-service personnel, allies and Australian Defence Force units or families of marchers and veterans not marching. The public will not be able to attend.

The Service of Remembrance, held immediately after the march, will be a ticketed event, and can be attended by up to 1500 people.

The Anzac Eve Youth Vigil, attended by young people from community groups at the SA National War Memorial, will go ahead, but the public will not be permitted to attend.

Commemorations are on track to be held as normal, however, no detailed information has been released yet.

Hobart’s Anzac Day parade will go ahead in a reduced format. All aspects of the commemorations, including the Dawn Service, the parade and mid-morning commemorative service will be ticketed events.

Most shops will be closed until 1pm, however, that will differ depending on the state or territory you’re in.

Essential shops, such as service providers, chemists, cafes, fruit and vegetable shops, petrol stations and small shops will generally be open all day.

Thoughts from a veteran

The Dawn Service in Newcastle is one of the biggest in Australia. From 2014 to 2019, the service had about 53,000 attendees each year.

However, this year, it will be an invite-only event and will be capped at 250 seated attendees.

“It’s sad that we can’t deliver to the community what they would expect us to deliver,” he said in a radio interview.

However, Mr Fayle, who is also a 72-year-old Vietnam War veteran, understands that the health of the community must come first.

Other ways to show your support

If you are unable to make it to a dawn service, there are other ways to show your support.

Last year, as the nation entered into strict restrictions in response to the pandemic and Anzac Day marches were cancelled, people were encouraged to “Light Up the Dawn” in their driveways.

This year, Australians are encouraged to take part again to show their support.

“If you can’t get to an event, get out there at the end of the driveway or balcony, wherever you are, as you did last year and light up the dawn at 6 o’clock,” Mr Fayle said.

Australians can also commemorate veterans at their local cenotaph or war memorial.

“If you wish to do something, if you want to go down and place a bunch of flowers or something similar, you don’t have to do it at 6 o’clock in the morning, you can do it at any time of the day,” Mr Fayle said.

“Place it respectively, step back and just move on, that’s a contribution that will be appreciated by anybody and everybody.”

Australians Prepare to Mark Anzac Day On Their Driveways at 6am 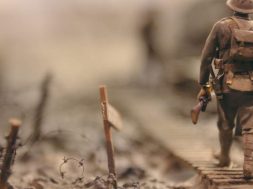 Banjo Paterson's Role as an ANZAC: One of the Least Known Parts of His Life